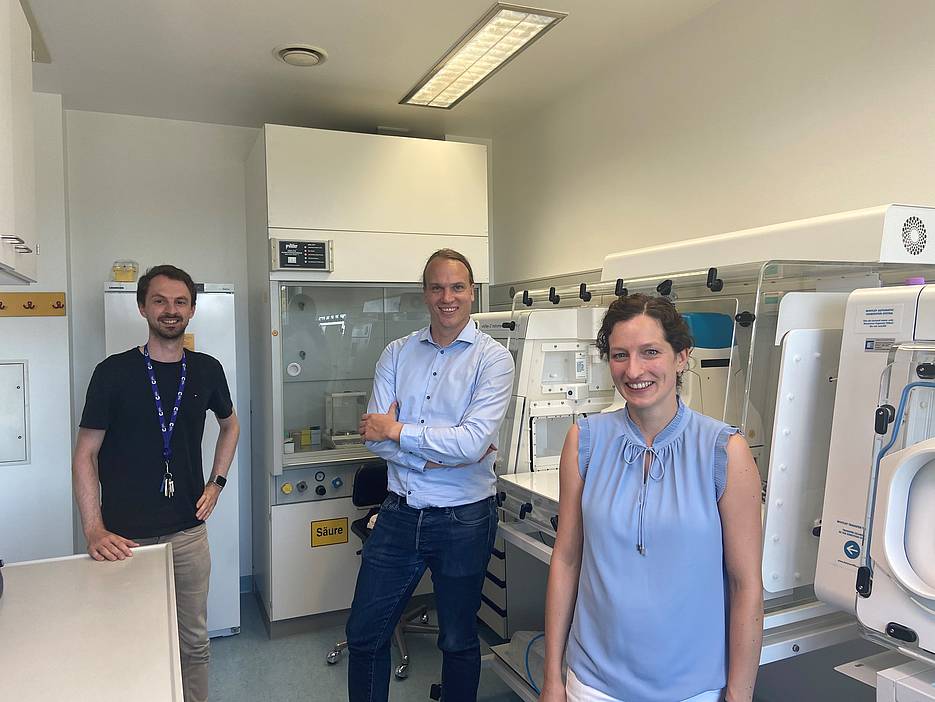 In January 2020, the three remaining MSNZ junior research groups have started their research activities. The laboratories are based in the Institute for Virology and Immunobiology and work on the biology of tumours and their microenvironment. Using single-cell omics approaches, primary cancer patient material, animal models and organoid technology, the three new MSNZ junior research groups aim to systemically decipher the cellular components in the tumour and its microenvironment and their role in tumourigenesis. With some delay, the labs are finally functional and research work is beginning to start.

Leo Rasche (centre in the picture) studied medicine in Würzburg and did his MD research project at the Institute of Pathology under the supervision of Andreas Rosenwald. In 2009, Leo joined the University Hospital Würzburg and started his training in internal medicine, hematology, and oncology which he completed in 2015.  At the MSNZ, Leo is investigating bone marrow cancers, particularly the pathogenesis and evolution of Multiple Myeloma (MM). The aim of his group is to characterize the plasma cell survival niche on a single cell level to identify MM permissive cell-cell interactions, potentially changing our understanding of immunotherapies, informing therapeutically targeted future studies. Leo is further investigating the selective pressure of novel immunotherapies such as CAR T cells on the clonal architecture utilizing patients' bone marrow samples derived from our clinical program.

Angela Riedel (right in the picture) studied molecular biotechnology at the University of Bielefeld and did her PhD in Molecular Oncology at the University of Southern Denmark. In 2013, Angela joined the lab of Jacqueline Shields at MRC Cancer Unit at the University of Cambridge (UK) as postdoc to study the contribution of stromal cells to tumour progression and immune evasion. She then moved to the German Cancer Research Centre (DKFZ) and joined Thordur Oskarsson’s group to further delve into the pre-metastatic niche of tumour-draining lymph nodes (TDLNs) in breast cancer. At the MSNZ, Angela is investigating the involvement of the stroma of tumour-draining lymph nodes in metastatic disease and tumour immune evasion. The main goals in the group are the identification of the requirements of stromal reprogramming for a successful metastatic colonization and the determination of tumour-derived drivers that prime these metastatic niches.

Kai Kretzschmar (left in the picture) studied biology at Goethe-University Frankfurt am Main and received his PhD in genetics from the University of Cambridge (UK) working in Fiona Watt’s lab on the role of Wnt/beta-catenin signalling in epidermal stem cells. In 2014, Kai joined Hans Clevers at the Hubrecht Institute in Utrecht (NL) to study cancer biology using organoid technology. At the MSNZ, Kai is using the oral mucosa and head and neck cancer as model systems to characterise the adult stem cell niche in epithelial tissue homoeostasis and cancer. To map cell-cell interactions and characterise the role of bidirectional signalling within the tissue and tumour microenvironment, Kai’s group is utilising genetic lineage tracing, single-cell transcriptomics, organoid technology and immunological tools.

Furthermore, the groups were able to recruit 5 international young and talented PhD students that will join the MSNZ in September/October time.

If you’re interested in joining us, please email us directly.