Elmar Wolf, PI in a MSNZ Joint Project, has published a paper on a crucial factor in the conversion of genetic information from DNA to proteins. 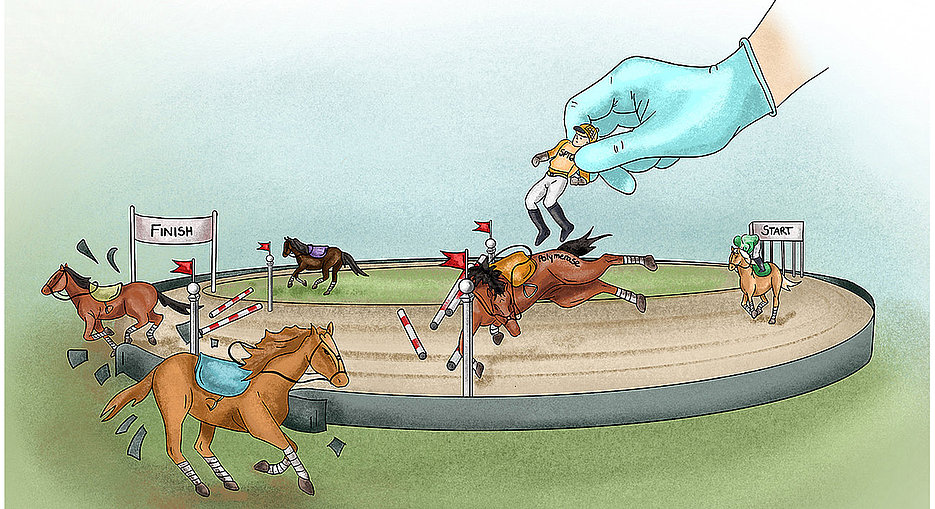 You can imagine transcription as an obstacle race in which the RNA polymerase has to overcome a number of hurdles. It is particularly difficult for it if the "rider" - the protein SPT6 - is missing. © Sandy Westermann

Obstacles on the racetrack of life

mRNA plays a key role in the conversion of genetic information from DNA to proteins. Their production is a delicate process. A research team at the University of Würzburg has now identified a crucial factor.

The corona pandemic has ensured that the term "mRNA" is now also known to a large public beyond laboratories and lecture halls. However, the molecule is much more than an important component of a successful vaccine against the SARS-CoV-2 virus. "mRNAs are a central component of all living things on our planet. Without them life as we know it would not function," says Elmar Wolf.

Wolf is a professor for tumour system biology at the Department of Biochemistry and Molecular Biology at the University of Würzburg. With his research team, he has now deciphered new details about the formation of mRNA which provide novel insights into how a fundamental process inside cells works: the transcription. The team presents the results of their research in the current issue of Molecular Cell.

Transcription: If one can still remember their biology lessons, then they know that it is the process by which the genetic information in the DNA is translated into messenger RNA – or as how scientists like to call it: mRNA. Only the mRNA is capable of transmitting the information from the genetic material of the DNA in the nucleus of the cell to the sites of protein biosynthesis outside the nucleus. "The mRNA composition thus decides how the cells of our body look and how they function," Wolf says.

The transcription process from DNA to mRNA sounds relatively simple: "You can think of transcription as an obstacle race. The RNA polymerase starts the reading process at the beginning of the gene, then moves through the entire gene and, finally reach the finish line," Wolf explains. If the polymerase makes it through to the end, the mRNA has been produced. Scientists have long known that a lot can go wrong in this process. After all, many genes are a long "race track" with plenty of obstacles.

In order to better understand what happens at the molecular level during the race, Wolf and his team took a close look at the process of transcription. "We studied an important component of the RNA polymerase: the protein SPT6," explains Wolf. The question they explored is: "Is SPT6 important for the process of transcription and - if so - in what way?"

What do the scientists do when they want to learn about the function of a protein:  they remove it from the cells and see what happens. That's exactly what Wolf and his team did. The result was quite clear: "Interestingly, RNA polymerase starts making mRNA even in the absence of SPT6," Wolf described. But then it regularly gets stuck in difficult places - you could say that it falls over an obstacle.

New picture of the transcription

This failure has two consequences that have a negative impact on cell function: On one hand, hardly any RNA polymerase makes it to the destination, which is why hardly any mRNA is produced. On the other hand, however, the gene itself is also affected. "Without SPT6, the polymerase destroys the obstacles and the racetrack, which is why functional RNA polymerases are then unable to find their way," says Wolf. Thus, it is clear that the SPT6 protein is a central element in the production of mRNA in cells.

With these findings, the researchers are helping to shed more light on the process of transcription: "Until now, scientists had assumed that the only thing that mattered for mRNA production was how many RNA polymerases started transcription," Wolf says. Thanks to the results that have now been published, it is now clear that by no means all RNA polymerases that start the transcription process actually make it to the end of the gene and that the protein SPT6 is essential for this arrival.

The full text of the paper can be found here (Molecular Cell).