Svenja Meierjohann, Bastian Schilling, and Elmar Wolf, MSNZ-PIs, have published a paper on the impact of NRF2 on melanoma malignancy. 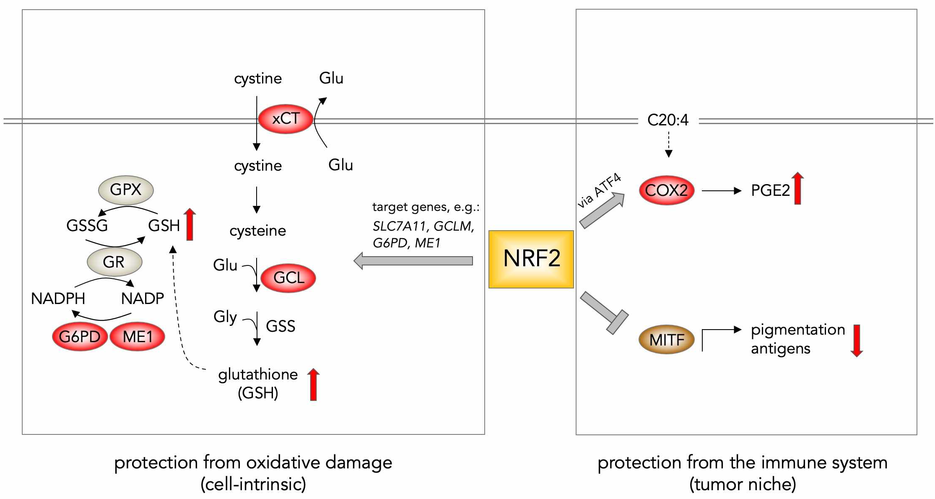 The transcription factor NRF2 is the major mediator of oxidative stress responses and is closely connected to therapy resistance in tumors harboring activating mutations in the NRF2 pathway. In melanoma, such mutations are rare, and it is unclear to what extent melanomas rely on NRF2.

The authors show that NRF2 suppresses the activity of the melanocyte lineage marker MITF in melanoma, thereby reducing the expression of pigmentation markers. They furthermore identified NRF2 as key regulator of immune-modulating genes, linking oxidative stress with the induction of cyclooxygenase 2 (COX2) in an ATF4-dependent manner. COX2 is critical for the secretion of prostaglandin E2 and was strongly induced by H2O2 or TNFα only in presence of NRF2. Induction of MITF and depletion of COX2 and PGE2 were also observed in NRF2-deleted melanoma cells in vivo.

A blog post “Behind the paper” can be read here, the full text of the paper can be found here (Oncogene, PDF format).