New paper on the role of MYCN in the cell cycle

Gabriele Büchel, PI in a MSNZ Early Career Project, has published a paper on the role of MYCN in the prevention of transcription-replication conflicts. 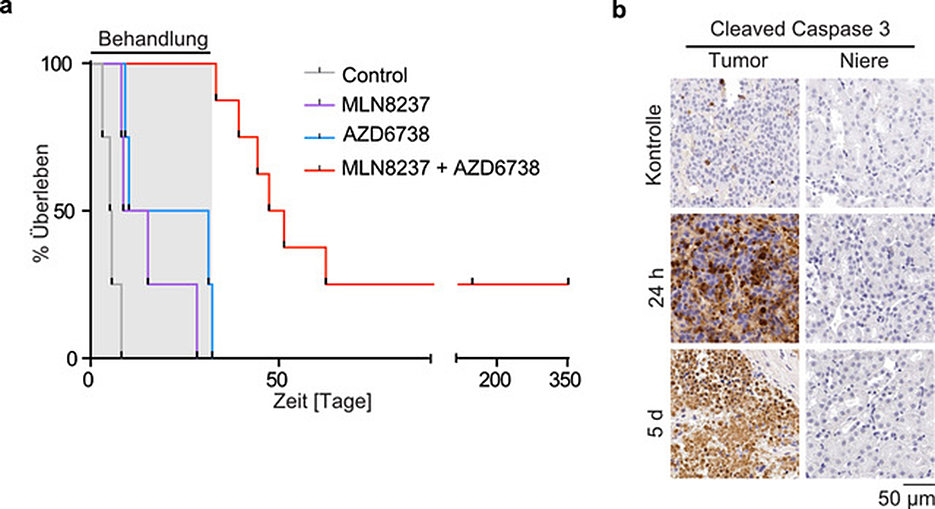 Survival curve of the TH-MYCN mouse model during long-term treatment with Aurora-A inhibitor (purple), ATR inhibitor (blue) or the combination of both agents (red). It is clearly visible that the combination therapy prolongs survival time. (C) by Gabriele Büchel

Stirring up Conflicts in Tumour Cells

With two commercially available inhibitors, the cell cycle of the cancer cells in the childhood tumour neuroblastoma can be disrupted at a key point causing tumour cell death.

Neuroblastomas are malignant solid tumours that occur mainly in early childhood. They arise from degenerated immature cells of the sympathetic nervous system. One prognostic marker to assess the malignancy of the tumour is the MYCN oncogene. High-risk neuroblastoma patients often have amplification of MYCN, i.e. very high levels of this protein, which drives uncontrolled tumour growth. Conversely, inhibiting MYCN or its function could be a promising therapeutic opportunity.

An important step towards this direction was taken by an international research project led by scientists from Julius-Maximilians-Universität Würzburg (JMU) in Bavaria, Germany, which was recently published in the journal Nature Cancer.

News about the role of MYCN in the cell cycle

The co-lead author of the publication is Dr Gabriele Büchel from the Chair of Biochemistry and Molecular Biology at the JMU Biocentre. The principle investigator explains: "Until now, it was known that MYCN controls the function of RNA polymerase. This reads the DNA in the cell nucleus and converts it into mRNA. Through our research, we were able to show that MYCN also plays a specific role during the S phase of the cell cycle, when DNA is also duplicated." In this phase, therefore, two processes take place simultaneously: the reading and replication of DNA. Figuratively speaking, according to Gabriele Büchel, "two trains are on the same track".

Together with the doctoral student Isabelle Roeschert, she found out that MYCN prevents collisions of the two trains – so-called transcription-replication conflicts. This signalling effect requires the two enzymes Aurora-A and ATR, both of which can be inhibited with existing pharmaceuticals. In this way, targeted "train collisions" can be induced to damage the tumour cell. Or in medical terms: the combination of both drugs leads to DNA damage and cell death - highly specifically in tumours, while other tissues remain unaffected. "In mouse models of neuroblastoma, we were able to achieve tumour growth regression using this strategy. Some of the experimental animals could be even cured with the combinational treatment", Gabriele Büchel clarifies the effect of this "therapy".

Clinical trials already on the horizon

According to her, patients could also benefit from the knowledge gained in the near future. "The substances we use are all already commercially available. Aurora A and ATR inhibitors as well as the combinations we use are currently being tested in a number of practical models which are closer tot he clinic. If they are successful there, clinical trials could start soon," Büchel announces.

In addition to the JMU working group, research teams from the Charité in Berlin, the Universities of Göttingen and Zurich and the Institute of Cancer Research in London were involved in the study. It was funded by the German Cancer Aid and the European Research Council.

The abstract of the paper can be found here (Nature Cancer).