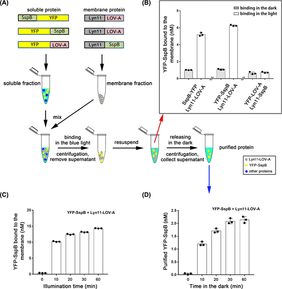 Protein purification is the vital basis to study the function, structure and interaction of proteins. Widely used methods are affinity chromatography-based purifications, which require different chromatography columns and harsh conditions, such as acidic pH and/or adding imidazole or high salt concentration, to elute and collect the purified proteins. Here we established an easy and fast purification method for soluble proteins under mild conditions, based on the light-induced protein dimerization system improved light-induced dimer (iLID), which regulates protein binding and release with light. We utilize the biological membrane, which can be easily separated by centrifugation, as the port to anchor the target proteins. In Xenopus laevis oocyte and Escherichia coli, the blue light-sensitive part of iLID, AsLOV2-SsrA, was targeted to the plasma membrane by different membrane anchors. The other part of iLID, SspB, was fused with the protein of interest (POI) and expressed in the cytosol. The SspB-POI can be captured to the membrane fraction through light-induced binding to AsLOV2-SsrA and then released purely to fresh buffer in the dark after simple centrifugation and washing. This method, named mem-iLID, is very flexible in scale and economic. We demonstrate the quickly obtained yield of two pure and fully functional enzymes: a DNA polymerase and a light-activated adenylyl cyclase. Furthermore, we also designed a new SspB mutant for better dissociation and less interference with the POI, which could potentially facilitate other optogenetic manipulations of protein–protein interaction.