Memory training for the immune system

The immune system will memorize the pathogen after an infection and can therefore react promptly after reinfection with the same pathogen. Now, scientists at the University of Würzburg have deciphered new details of this process. 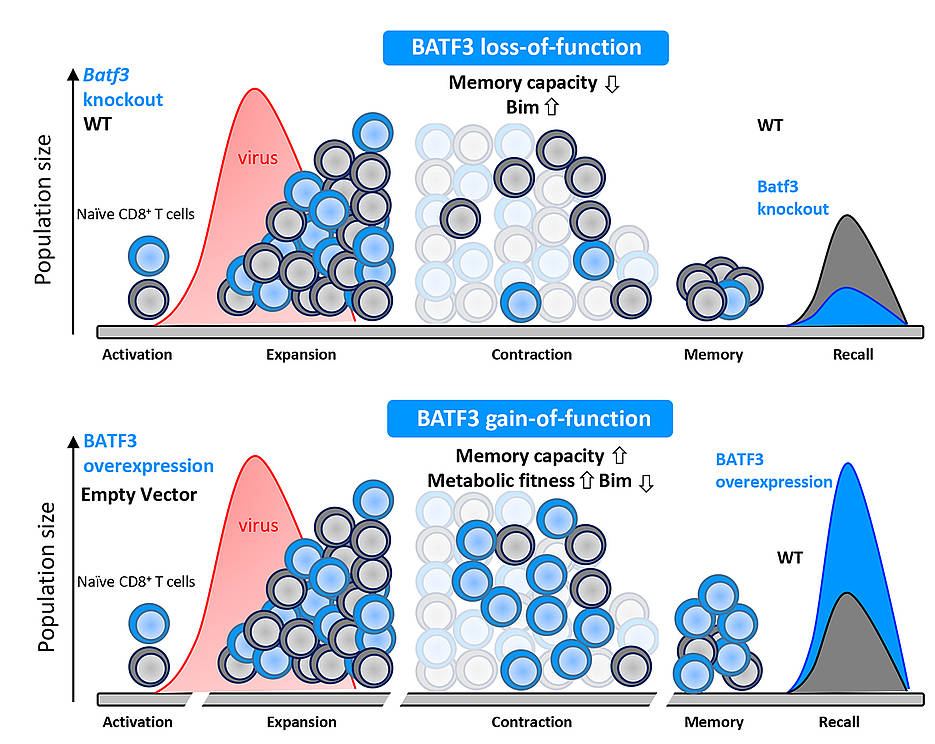 Schematic representation of the function of BATF3. In the upper half you can see the physiological function and the consequences if this factor is missing (knockout). The lower half shows the consequences in case of an unnaturally increased expression with the resulting therapeutic applicability. (Image: Dr. Marco Ataide)

After an infection of the human body with a pathogen, a cascade of reactions will usually be set into motion. Amongst others, specific cells of the immune system known as T cells get activated in the lymph node and will subsequently divide and proliferate.

At the same time, these cells will gain certain functions, that enable them to destroy other cells, that are e.g. infected by a virus. In addition, they produce certain proteins – so called cytokines – with which they can stop the reproduction of the pathogen.

Recently Kastenmueller and his team deciphered new details of the functioning of the immune system, which are important for the immune system to remember recent infections. Their results have been published in the latest issue of the scientific journal Nature Immunology. Their findings could help to improve immune therapy towards tumor diseases.

“If a body has fought and eliminated a pathogen successfully, most of the recently proliferated T cells are no longer needed and will die”, Wolfgang Kastenmueller explains. But about five to ten percent of these cells survive and develop into a long lasting “memory population”, that will protect the body against future infections.

Improvement of the immunological memory

Kastenmueller describes the main result of his study : “In our recent work we identified a transcription factor - BATF3, that very specifically regulates the survival of these cells and therefore the transition into a memory response”. The scientists could show that this factor only gets produced shortly after the initial activation of T cells. The absence of this factor leads to a permanent malfunction of the memory response.

Until now the role of this factor for so-called CD8+ T cells was unclear. It was only after the scientists overexpressed this factor in CD8+ T cells that the importance became clear, as they could see that the survival of these cells and thus the immunological memory improved significantly.

This study was conducted in close collaboration with the Medical Clinic II of the University clinic of Wuerzburg. It combines basic research with applied medicine and could help to develop better therapies for cancer treatments that use the immune system of the patient – so-called CAR-T cell therapy.

Using CAR-T cell therapy, T cells get extracted from the blood of the patient and are subsequently genetically modified with the chimeric antigen receptor (CAR) molecules. This modification enables T cells to attack tumor cells, which they couldn’t biochemically detect before. These modified T cells are subsequently transferred back into the patient.

Currently CAR-T cells are successfully used for therapies for diseases such as B cell lymphoma, a malignant disease of the lymphatic system. Kastenmueller and his team together with Professor Michael Hudecek of the Medical Clinic II are now planning to modify CAR-T cells so as to improve the survival of the patients and thus the therapeutic efficiency.

By clicking 'OK' you are leaving the web sites of the Julius-Maximilians-Universität Würzburg and will be redirected to Facebook. For information on the collection and processing of data by Facebook, refer to the social network's data privacy statement.

By clicking 'OK' you are leaving the web sites of the Julius-Maximilians-Universität Würzburg and will be redirected to Twitter. For information on the collection and processing of data by Facebook, refer to the social network's data privacy statement.